Help yourself to become the person you want to be.
And if the new you is a non-smoker, then we can help. 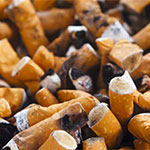 No matter how much we are told about the dangers of smoking, our destructive habit continues. Why? Basically, it has become an ingrained habit in our life. This habitual behaviour is controlled by your subconscious mind, and so the most effective way to stop it is with hypnosis, because hypnosis works directly with your subconscious mind – the storage location of your habits.

During a single two-hour session, you will be provided with the information and the motivation to stop smoking completely. You will learn how the brain works and understand some of the internal conflicts. We will examine strategies to deal with "difficult" situations, and even look at overcoming relapses should they ever occur. On top of that, the hypnotherapy session will strengthen your subconscious mind to help you achieve your goal of becoming a non-smoker.

For more information or to book a single two-hour session contact Trevor Eddolls on 01249 443256 or e-mail trevor@ihypno.biz.

Note: there is no initial consultation for stopping smoking.

So, what’s the best way to stop smoking? Here are some of the popular methods:

Here are some other studies:

University of Iowa, Journal of Applied Psychology, “How One in Five Give Up Smoking”. October 1992. (Also New Scientist, October 10, 1992.). A meta-analysis that combined 600 studies of 72,000 people and is one of the largest studies on smoking and hypnosis ever. It stated that “hypnosis is three times more effective”. The study found that hypnosis was three times more effective then the patch and 15 times more than willpower. Hypnosis is the most effective way of giving up smoking, according to this largest ever scientific comparison of ways of breaking the habit.

“Guided health imagery for smoking cessation and long-term abstinence.” Wynd, CA. Journal of Nursing Scholarship, 2005, 2005; 37:3, pages 245-250. It’s simple and powerful conclusion: willpower just wasn’t enough to quit or maintain freedom from smoking. This study found that patients are twice as likely to quit when using hypnosis. As a matter of fact, 71 smokers showed that after a two-year follow up, “patients that quit with hypnosis were twice as likely to still be smoke-free than those who quit on their own.”

Texas A&M University, System Health Science Center, College of Medicine, College Station, TX USA. Int J Clin Exp Hypn. 2004 Jan;52(1):73-81. Clinical hypnosis for smoking cessation: preliminary results of a three-session intervention. Elkins GR, Rajab MH. This study found that 81% reported they stopped smoking after hypnosis. Thirty smokers enrolled in an HMO were referred by their primary physician for treatment. Twenty-one patients returned after an initial consultation and received hypnosis for smoking cessation. At the end of treatment, 81% of those patients reported that they had stopped smoking, and 48% reported abstinence at 12 months post-treatment.